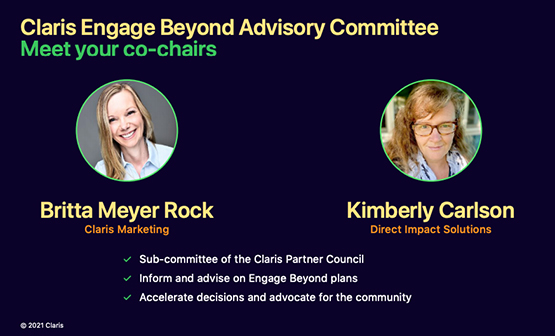 Direct Impact Solutions would like to congratulate Kimberly Carlson, the Regional General Manager of our U.S. Subsidiary, for her nomination to serve as the Claris Engage Beyond Advisory Committee Co-chair.

Kimberly’s nomination as co-chair of the Claris Engage Beyond Advisory Committee furthers her goal of making Claris Engage a more inclusive event. Kimberly notes that “there are always those that felt like Engage wasn’t really about them or for them. I’m trying to elevate the level of engagement by increasing the overall representation. My goal is to diversify the audience by diversifying the session speakers and topics.”

Interested parties can find out more information on these committees as well as information about the refreshed format for Claris Engage Beyond on this post in the Claris Community.